While distance runners should be concerned about fluid replacement every day that they are in training, the summer heat puts these concerns at the top of the list.  Like so many issues in sport training there is no shortage of anecdotal information about hydration, and then there is the scientific research.  The goal is to effectively replace the fluid that is lost due to sweating and respiratory loss that occurred during the workout that day to aid in a speedy recovery.  A simple answer of how much to drink would be to way the athlete before the run, and then after.  The lost weight is water and needs to be replaced.  Because water is such a good solvent, the thought is that while the water is being replaced perhaps other water soluble nutrients such as carbohydrates (CHO) and electrolytes should ride along with the water into the body.  There has been some research that shows adding protein to a carbohydrate rich drink may speed the absorption of the fluid and carbohydrate by the body.  How about the timing of consuming the water or carbohydrate drink to enhance recovery?  Research done at the Boston Marathon over the past eight year’s shows that a surprisingly high number of runners finished the race with too much water in their system.  These runners over-drank during the race which caused their sweat to be too dilute, causing it to drastically lose its effectiveness.

Most of the fluid that a normal person loses each day is replaced via the foods we eat.  Distance runners need to replace a greater quantity of liquid and drink more.  They may drink water, a sport drink, or a natural carbohydrate drink such as orange juice or milk to replace lost fluid.  They may also drink carbonated soda or energy drinks; however, neither of these is effective in replacing fluid and do add the burden of other issues as well.  They will not be addressed here and their use should be discouraged.

Our bodies desire stability of homeostatic issues.  Stable metabolic temperature, water and food supply, and oxygen concentration are less stressful to the body then those that wildly fluctuate.  When I go to across country meet I see some athlete’s drinking water before the race while others are sipping off of a sport drink.  Which drink is better before the race, after the race, or is it just personal preference?

Figure 1. indicates blood work from two distance runners (Hulston et al. MSSE. 2009). The data points on the graph indicate the carbohydrate concentrations in the blood before and during work done at the aerobic threshold.  The difference in the two lines is drastic and shows the carbohydrate dissolved in the blood and available for muscular fuel between someone who drank a sport drink before the work and someone who only drank water before the work.  The work starts at time = 0.  One hour before the commencement of work, one athlete drank only water, while the other drank only a sport drink.  When the work started the carbohydrate drinker had a lot more fuel available in the blood, but after 15 minutes of aerobic threshold running the fuel supply in the blood had collapsed.  The water drinker actually increased the available fuel in the blood in a more systematic way.  The bottom line is that if you are an 800 meter runner or a miler, it probably makes no difference in how you pre-race hydrate, but anything longer as a race or workout, there will be issues.  Sport drinks appear to be most effective post-workout as a means for re-hydration and replenishment of some lost carbohydrate.  However, as the evidence shows, within one hour of longer races water should be the main means of hydration. 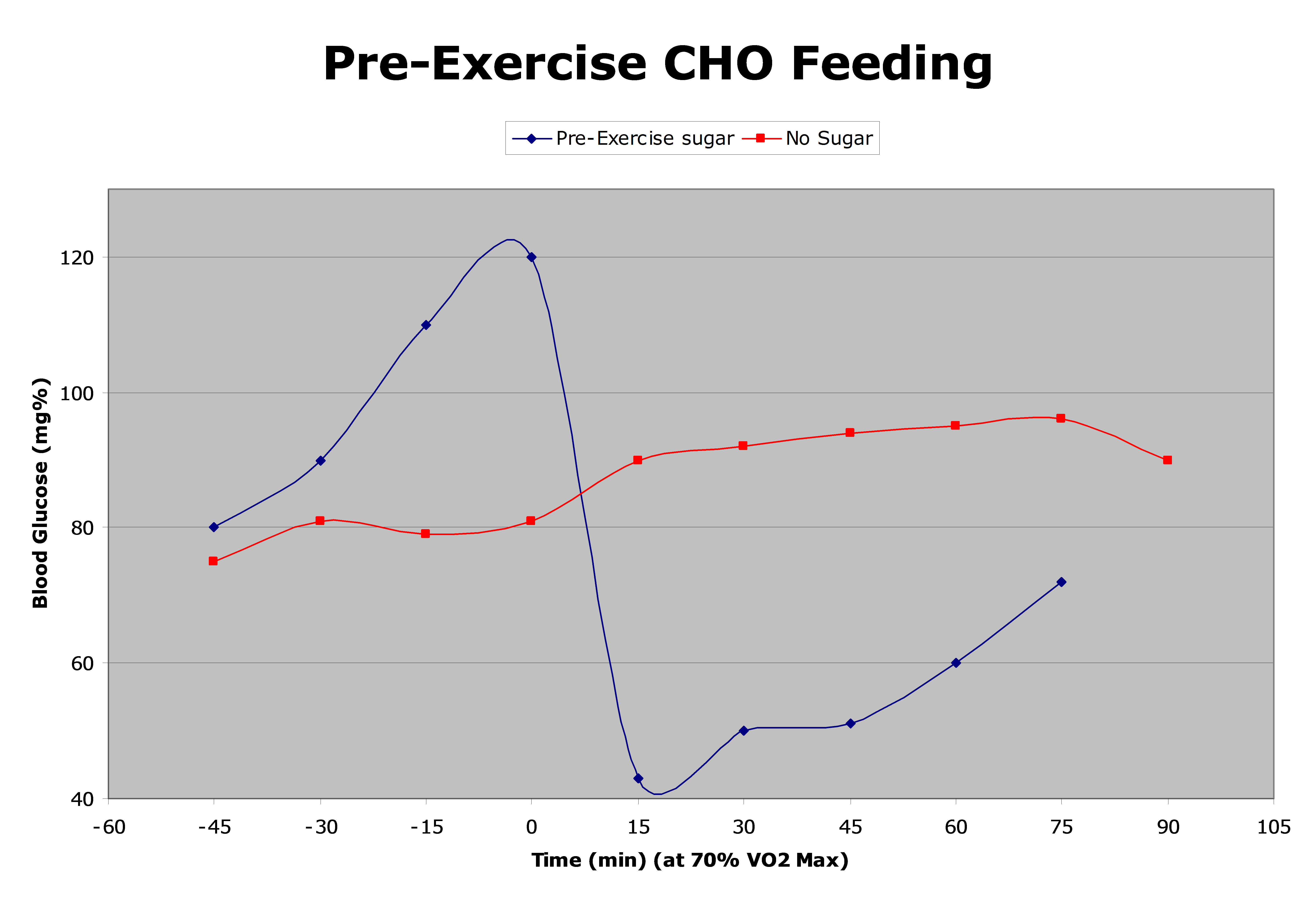 Some recent studies have indicated that ingesting small amounts of protein in a carbohydrate sports drink may aid in performance.  It probably does not aid in the actual performance during the activity and should not be ingested during the run, but taking in this type of drink post-workout would be effective.  A more natural alternative to protein rich sports drink could be chocolate milk of all things.  It contains the natural proteins found in milk with the additional carbohydrate to chocolate it up.  Research has shown this chocolate drink closely matches the nutrition of sports drink.